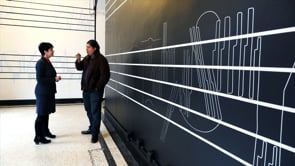 Brooklyn-based artist Rafael Vargas-Suarez has transformed the Miller Theatre lobby into a 360-degree art work in which abstract geometric marks suggest notes on a musician’s staff paper. The artist has remarked that listening to music while drawing and painting gives his work a “musical approach.” Known for his large-scale wall drawings and site-specific installations, the walls of Miller Theatre became a canvas for this unique commission, which opened on October 10, 2013 and is on display throughout the season.

The site-specific work was commisioned in collaboration between Miller Theatre and the Miriam and Ira D. Wallach Gallery, under Deborah Cullen,  Director and Chief Curator.