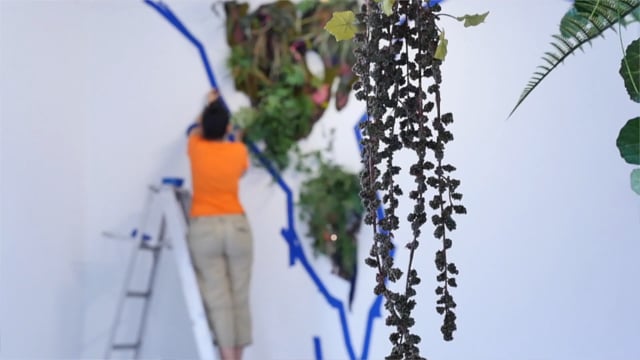 The only venue of its kind on the Columbia campus, Miller Theatre is home to a wide variety of events...

The Harlem-based Colombian-American artist Lina Puerta transforms the lobby of Miller Theatre with a new installation from her Botánico Series, inspired by weeds and uncontrolled nature within urban spaces. Exploring the tension between humans and the botanical world, Puerta's ongoing series, which she started in 2010, evokes nature's resilient response amid efforts by humans to exert control. Puerta’s immersive installation will be displayed throughout the 2017-18 season, from July 17, 2017 – June 29, 2018, greeting thousands of concertgoers as they arrive for performances over the course of the year.

Miller Theatre will host a creative conversation with Lina Puerta on October 17, 2017, co-sponsored by the Columbia University Arts Initiative.

Lina Puerta's site-specific work in the Miller Theatre lobby was co-commissioned by the Miriam and Ira D. Wallach Art Gallery and Miller Theatre at Columbia University.